A million years ago when I first started trying no poo it was all about being a bit of a hippy and frankly it all failed. But I never really let go of the idea that shampoo was turning me into a fraggle.

I’ve always had incredibly thick & wavy hair and equally not wholly known what to do with it. Even my good hair days were an example of why curling tongs are probably best left for professionals  (also, I’ve been honing the unhinged academic look for some time)

Curling iron & frizz. But, I was celebrating my brain not my hair that day

Most days, my style was best described as “shut up, I can either keep the kids alive & expand my brain OR look like a princess. Not both”.

I love how this photo hides the fact I had just set light to the microwave!

Even so, my long & generally colourful hair was my trade mark. I spent my 20s with it flying free and frizzy or woven into coloured dreadlocks (welcome to early 2000’s punk / nu metal culture).

At their tamest, my dreads were brown & red. My favourites were the black & blue set.

Then I met with dysautonomia and my hair & I parted ways. Literally. No amount of bleach, or braiding, or spiking ever made it thinner, but 6 months of being unable to digest solid food and it came out in clumps. I was never brave enough to rock the skinhead look so I turned to the orthodox Jewish community groups who taught me how to wrap my head in a Tichel and I acquired a whole host of beautiful scarves to adorn my now tufty head.

Two years down the line and solid food is back, albeit not all the time, alongside a constant massive dose of vitamin D and what once was thick & wavy has grown back thicker & curly! 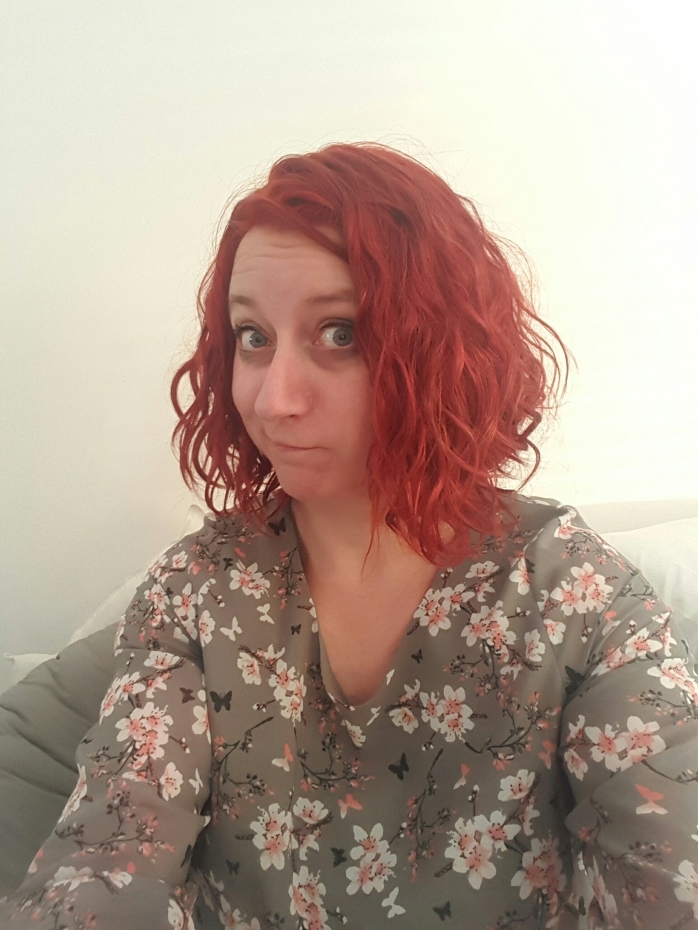 What am I meant to do with this?! (2 months into CG, but unaware silicone had snuck into my conditioner – chemistry lessons kids : pay attention)

So, at a loss of what to do with hair that seemed to be growing out instead of down I rediscovered the no poo thing, this time through the Curly Girl Method. I’ve gone full circle & now jumped down the rabbit hole of curly hair…

This time, instead of baking soda & ACV (apple cider vinegar), I’m opting for “low poo” which means no products containing silicone, washing once per week max, leave in conditioners, and alcohol free gel “casts”. With this method I don’t smell like a chip & my hair is in amazing condition. I’ve also learnt a whole new vocabulary:

The act of conditioning once, then scrunching the ends of your curls with a second conditioner application that you may or may not rinse out. I do, but those with really porous hair may not.

I know it’s no poo, but ew! Actually, this is the theory that drying curly hair with a normal towel damages the curl & encourages frizz. Instead, plop your head onto tshirt material or similar to allow the curls to dry whilst coiled close of the head. Some people plop for 20 minutes, whilst others (including me) plop all night.

This is where having worn tichels for months has come in handy as I’m a dab hand at a secure turban!

Just remember that post-plop the curls won’t be bone dry so you need to give them time to reach full crunch before scrunching.

I use Cantu Cream activator, or ahem… ummm… personal lubricant. (That’s a whole other blog post, but trust me it works wonders). It’s basically an extra moisturiser for your curls that encourages them to coil into their natural pattern and stops frizz. Stick it on your newly washed hair before any gel.

A technique for applying curl cream or gel with flat hands instead of scrunching or raking it through. You also rub hands together first to spread out the goop & put it on more evenly.

Scrunch Out The Crunch #SOTC

So, after you’ve low poo washed your hair, added curl activator, added gel with praying hands, then plopped and diffused / air dried, it’s time to scrunch out the crunch.

Remember in the 80s & 90s when we all had spiral perms and wet look gel? Well as much as we thought we looked the dogs dangley bits, we didn’t. To get rid of that late 80s Minogue look, you need to SOTC.

Kylie wasn’t scrunching out the crunch …

Once your curls have dried to crispy perfection (not a trace of damp left), the gel will have created a “cast”. Now is the time to use your hands, or preferably a tshirt to scrunch each section and break down the gel cast to reveal soft & defined curls.

So, 7 months into low poo and 4 months into using the Curly Girl Method what does my natural hair look like?

It looks like I have curls! And “bad” hair days aren’t really a thing anymore.

This works so well with my general health because I have no more fighting with hairbrushes, only need the energy to wash it once each week, and I don’t have to be physically that functional I’m. The morning. Getting ready consists of: take off my scarf, spray a bit of water/conditioner mix into my hair, scrunch it, bobby clip the front & off I go.

You can read more about the official Curly Girl Method here. (Not an advert, but as it’s not my method, you should hear from the originator!).