I’ve joined the ranks of the great unwashed and let myself go a bit ‘summer’. I’ve let the sun bleach my hair to an alarming ginger colour with some serious roots and I can’t actually remember the last time I wore makeup. I even started wearing random fabric bracelets and anklets…. My skin is looking dodgy and I’m feeling a bit old and worn around the edges. I even had a ‘how much grey hair is in my roots?!’ moment. In light of my recent musings on whether body hair is actually that bad, it’s clearly time to take action. I’m 33, but not in my head. In my head I’m singing that god awful Taylor Swift song (that’s “22” for those who aren’t tormented by a 7 year old’s music tastes).

This is me this evening. Tired after a long, but very fun day at the beach with friends and oh so many children (I was given charge of eleven at one point, all under 9).

Phase One of return to looking like me was the hair and skin and eyebrows….

Several hours of exfoliation, mixing stargazer red and purple and plucking and we have this!

I feel much more ‘me’ now the trademark hair is back in place. Tomorrow, I might even stick some make up on!

Alternatively, I have a blog about my amazing friends, car keys, breaking windows and many many children to write…

Ok, I had to look this one up on google after I kept reading it in comments and blogs. What is crunchy? Am I crunchy? Do I want to be crunchy?

1. Crunchy means to have altered your lifestyle in order to be more environmentally conscious. It comes from the mocking term used for people who made their own granola. Those hippies who were a bit ‘crunchy’.

2. I think I am a little bit crunchy, yes. I think I’m best described in my hippiness as ‘could do better’.

Actually, it’s the Internet, and specifically other people’s blogs that have let me be a bit crunchier this year. Take this week for instance – I’m working my way through the stuff we bought at the PYO farm. Today’s mission, cook some kohlrabi that was grown less than a few miles from our house..

Before this week, I didn’t have a clue what kohlrabi was, let alone how to cook it and frankly, my mum’s 1970s good housekeeping books were less than helpful. But the lovely Reluctant Hippy posted a link to her blog and low and behold, it sounded delicious.

So we chopped it up into cubes…

And I got TinyPants in on the action with her making sure all the oil and garlic was well and truly coating the stuff.

We used cheddar instead of parmesan as we’d run out, and served it with pork loins baked with coriander, roasted cubed potatoes and peas the whole family was bowled over by how good this tasted! Clean plates all round 🙂

I’m not likely to move into a yurt and milk goats any time soon (although that would be a great way to spend a summer), but I am looking closely at what we eat, and what we wear and am getting a little more vocal about my objections to fracking, but that’s a whole other post.

Being a bit of a hippy, the issue of body hair crops up regularly (pun intended!). Now personally, I don’t have a huge issue with women of a hairy persuasion and if left to my own devices on some kind of kibbutz, I would probably join the ranks of the Germanic and pose for Rembrant paintings with my curves and hair as celebrated parts of me. 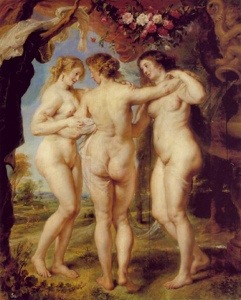 But I’m not. I’m British, and am married to a man that just isn’t with me on the hairy leg debate. As such, a solution must be found. And one that is effective enough to deal with the impact of hormones and age which are slowly but surely convincing my body that I am actually a mammoth of the wooly persuasion.

There’s a whole other issue here with perceived norms of the female form and this blog seems to hit the nail on the head by adjusting famous pairings of women to conform with current western ‘norms’.

Shaving – It’s the go to quick solution, but doesn’t last and frankly I suck at it and despite being over 20 years into various forms of hair removal, I always end up cutting my knees.

Waxing – when done by a professional it HURT. And I limped off bruised and vowing never to return (and wondering who in their right mind would consider wax for tidying up the lady garden, let alone a Brazilian!). Home kits have been tried and whilst reasonably effective at hair removal, they do seem to swap hair for weird sticky residue. I’m not a spider. Attracting my potential mate by means of sticking them to one of my limbs is either weird, a very niche fetish or both.

Sugaring – yeah, see above, only stickier and has the added bonus of attracting insects.

Laser removal – expensive in the extreme!

The NoNo – ooh! I thought. Pain free? No shaving? How could this possibly work! …. By burning the hairs off your skin. I kid you not.

Epliator (aka. The Pain Machine)
It’s the lessor of a variety of evils. And in the summer, the best way forward.

Ahh bless. Even the charging light is a little heart. Don’t let it fool you though – its removal technique is a rolling thing of tweezers that merrily rip out your body hair as they pass by. Then spit them out onto whatever surface you’re sitting on. 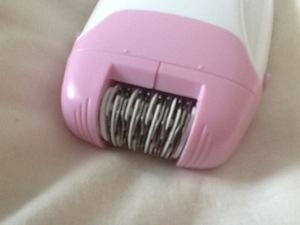 It’s not as painful as waxing, but it takes a lot longer. The sensation is not unlike being tattooed. All over your legs. Eventually, you stop registering the little bee like stings and focus on the frustration of that patch you missed or why it really bloody hurts each time you attempt your knees.

Eventually, you give up and head away from the hair removal device of choice for the Spanish Inquisition and have a hot bath to soothe all the little red dots where once sprouted soft, healthy, natural hair….. And remove the rest with a razor.

The most painless form of dealing with body hair? Find a time machine, go back to the renaissance, be hairy. Otherwise, look for sympathy from your blog followers.