It’s just double jointedness. Nothing to worry about.

These were the words of Dr Harper when faced with a parent caller on ITV’s  This Morning program who was concerned about giving her child a “note” to excuse them from PE. An Internet backlash commenced by people who were thoroughly offended by her off hand comments which was watched by a rather bemused wider community. From an outsiders perspective,  what could be wrong with being double jointed? You don’t get a note from your mum if you’re bad at maths! But equally, being had at maths doesn’t present the possibility of having a genetic connective tissue disorder that can lead to severe disability and at worst, sudden death. (That’s very much worst case & very rare – and also, you’re not bad at maths, you just need more practice and a good teacher). Dr Harper showed a similar disregard for the Hypermobility Syndromes that so many medical professionals I have met have done, and I’m not in a minority. The backlash was in part an outpouring of the frustration felt by being told we are faking, drug seeking, or just mentally ill. I like to believe that these doctors refuse to diagnose Ehlers-Danlos as it is an incurable Syndrome which is just managed with pain relief and specialised physio. Doctors like to cure. We are the square pegs in their round holes. 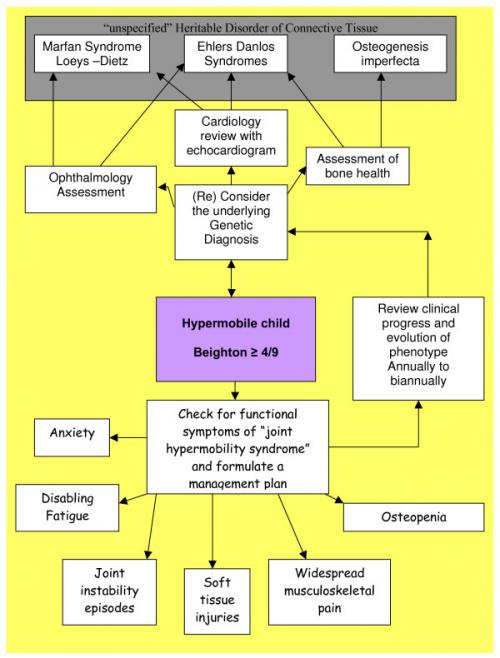 Age 7 – riding my bike, by knees are clicking and ache so much that I beg my mum to rub deep heat into then at night. It’s just growing pains. Nothing to worry about.

Age 10 – I arrive in A&E every few weeks with a new sprain or twisted ankle. My teacher remarks how I love those bandages. Maybe I just want some more attention. Nothing to worry about.

Age 15 – I faint at random and I’m exhausted all the time. I’ll grow out of it. Nothing to worry about.

Age 20 – knots in my shoulders cause weekly migraines. I’ve stopped mentioning the weird growing pains that didn’t go away, but I’m fed up. They’re just headaches because of depression & the injuries… well you’re clumsy. Nothing to worry about.

Age 24 – Symphis Pubis Dysfunction in my first pregnancy has me on crutches by 18 weeks and labour threatens on and off from 20 weeks with Pre-eclampsia. It’s just a first time pregnancy. Nothing to worry about.

Age 25 – Symphis Pubis Dysfunction again, Pre-eclampsia and early membrane rupture at 32 weeks. You’re just not good at being pregnant. Nothing to worry about.

Age 27 – slipped disc and worsening back pain that just can’t be ignored with co-codamol. It’s just bad posture. Nothing to worry about.

Age 30 – using a walking stick on and off again. This time with the addition of the occasional wheelchair when it gets too much. Feeling in my feet gets lost more often. It’s just a bit of nerve damage. Nothing to worry about.

Age 35 – using a powerchair daily and now unable to walk more than 8 metres using two crutches. Knees, SI & shoulders all subluxing at least once a week, if not daily. Now using morphine to control the pain. Oh, and given my official diagnosis of Ehlers Danlos as a new GP joined the dots after recognising the signs because a friend of hers also has it. So, yeah, probably something we should have worried about earlier.

So just to return to that original quote, going on National TV and dismissing a child that complains of pain from hypermobile joints may just contribute to a pattern of dismissal by the medical profession. It might not just be Hypermobility. It might be something to worry about.

Just because you can’t cure me, doesn’t mean you can’t help me. Listen. Diagnose early. Use ongoing physio as a preventative measure. Help me not get worse.