I’m sending my kids away for a whole week on Monday. With a bunch of people I hardly know. (A bunch of vetted and CRB checked people, but I don’t know them). And mobile phones are banned. I can’t talk to my children for a whole week. I can’t walk past their bedroom at night and check that they’re breathing (yep, I still do that. It’s part of my routine). They’re excited. I’m freaking out. And no one else seems that bothered that we’re letting the kids out of our sight for a week. Doesn’t that seem weird to you? Shouldn’t we be more protective than this? What if they want to come home, and the leaders think they just need to toughen up? (Yes, I’ve read that from several camp leaders posting on worried parent forum posts. Or the ones who think that parent phonecalls undermine their authority – now those ones I could have happily throttled.) The idea of leaving my frightened child somewhere that I could just jump in the car and get them from is borderline horrific. How am I meant to protect them from that, if I can’t contact them?!

I am of course projecting my own fears onto the girls – I wasn’t very good at being away from home as a child. I sobbed regularly when left at school, and the one night I did stay away from home at their age, I ended up being given antihistamines (the old fashion sleepy ones), just to calm me down. I was a teenager before I attempted it again. By that point I found my feet and promptly bugged off on a regular basis.

Worrying and fretting isn’t going to help – all its doing is making me agitated and snappy. I’m in full on flight mode and spent a good hour this evening thinking of reasons why they can’t go and how to engineer a reason for camp to be cancelled. Apparently, I’ve lost my mind. This isn’t borstal, this is fun filled brownie camp. So I did something constructive. This is the email I sent at ten past midnight, because I can’t sleep.

Just a quick email before the girls come up to brownie camp this week.

While we have everything packed and ready, the girls (and far more so I) am a bit concerned about the procedure should they be homesick during the week. As there is no direct contact with the camp itself, what will happen should one of the girls request to come home? My main concern is that they would be encouraged to ‘stick it out’, which is not a situation that I would be happy about at all.

I do understand that I am probably far more worried than they are, and everything will be fine. However, I would appreciate reassurance that a phonecall home would happen in these circumstances.

Yep, haha, isn’t it just hilarious that I’m such an anxious over-protective mother? I won’t mention that I feel physically sick (and have done for weeks) to the point where I have heartburn when it’s talked about and actually don’t know if I can leave them there. I’d never let on to the girls quite how awful this experience is from the adult’s perspective, as I’m determined to not pass on some of my more psychotic traits like irrational anxiety about my offspring’s safety. (No you can’t go on that fairground ride as mummy just had a vision of those flimsy cables snapping and launching you to a high velocity death. See? Mental.)

LSH is totally laid back about the whole thing. Difference? He went to cub camp, I wasn’t a brownie so this is new. He’s not really getting the whole obsessive packing and preparing on my part.

The girls will be fine. They’re not me. I however may have to seek out some of those nice antihistamines or something similar for the week…

I got stupidly excited by our first Graze box. For those of you who haven’t been sucked into the snack revolution, this is a company that chooses 4 interesting snacks and posts them out to you in a little box once a week (or more). Delivered, they cost around £3.70 per box, which is pretty much what you’d pay in the shops for this type of snack. You can rate their snacks on their website so typing don’t get any nasty surprises and most of them are reasonably healthy. 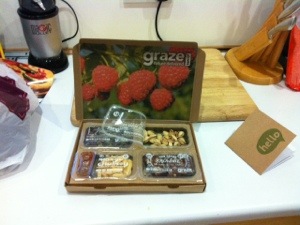 Between me and LSH these aren’t going to last very long!

Half of the box has just been noshed by me having a brownie session (you’d never know this was healthy!). 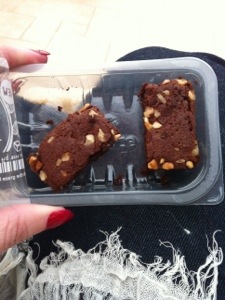 (Um… There were three… I was just testing them out…) 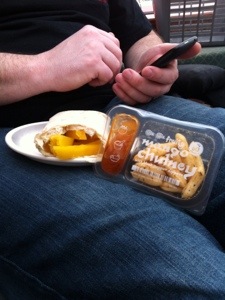 And for this reason, I’m sticking the code on here for you guys to get yourself a free box when you sign up. (I’m nice like that, and I’m now toying with the idea of getting a second box each week…)

Just enter this code into http://www.graze.com

It’s not often that I go out with the grown ups to an actual pub, but that is exactly what happened last night. It seemed to slip my mind that I would have charge of my two lovely midgets for the whole of today and the pink wine flowed along with the conversation. At some point my long suffering husband arrived to guide us giddy ladies home by which point I was fairy sure I’d overdone it a bit.

This was further confirmed by a restless night wondering why my bed was spinning around the room and my six year old stroking my cheek as I slumped back onto the sofa for the second time after running off to hurl in the bathroom.

For a while we were saved by Cartoon Network and the movie channel (Pirates in an Adventure With Scientists is spectacularly funny), but no parent can avoid the actual act of parenting for long and whilst tiny pants is happy sitting in her chair & blanket fort with a bag of pencils and a forest of paper, the beanpole needs some entertaining.

In an attempt to be productive, we dragged out the fabric drawer which is still stuffed with coloured fleece after my summer of imagination toy making and embarked on her trying for the crafting Brownie Badge.

One of the parts of this is to make something using a specialist technique and as they have lost their Brown Owl toy, she’s on a mission to make a replacement using appliqué. (There will be a bit of parental assistance here, but I’m leaving her to do the majority)..

We started off by cutting out the basic pieces and placing them on each other to give us a guide.

And so we had the makings of Brown Owl:

It might be the effects of the mega hangover, but everyone seems really contented and quiet this afternoon, despite me being a rather ineffectual parent.