I’ll be honest, many of our adventures out to “accessible” venues have proved to be less than successful, and having visited a UK Centreparcs waaaay back in 1993, I had images of those days of camping cots in a moth ridden room returning. Frankly, TripAdvisor had not made me confident with tales of overcrowding & poor upkeep… so it was with trepidation that we headed to Les Trois Forêts, near Nancy.

We had opted to drive here over 2 days to give me a chance to survive the journey. I’m not ready to fly again & at least in a car, we can manage our own schedule, & the only person assisting me is Mr Geek. Having stopped over in the Ibis Hotel at on the 1st night, for the 1st time in months I was faring better than Mr Geek. The poor soul then drive us for a further 6 hours from Valenciennes through Belgium, Luxembourg, and eventually back into France to just past Nancy where our first destination lay waiting.

We were handed a smart card for our chalet & told that with my blue badge we could park outside the chalet & leave our car there. We had booked an accessible VIP chalet for 8 as we were spending the week with Mr Geek’s parents & youngest sister. They were braving the journey in 1 and managed the whole thing in just 13 hours (?!?). When initially exploring the idea of centreparcs we’d looked at the European sites as a cost comparison- we were keen to go abroad, and OMFG the prices on the continent were comparable to a week (7 nights) in France in a VIP cottage for 8 equalling a midweek 3 night break in basic accommodation for 4 of us in the UK! Absolute no brainer.

The slope down to (and up from) the chalet was rather steep and had an iffy hairpin bend, but once inside, it was HUGE! There was an enormous living area and two massive dining tables; one inside & one outside. The gangways were nice & wide leaving plenty of room for people.

The kitchen is open plan, but not built for someone at sitting level so whilst I could operate the provided coffee pod machine (massive bonus as this neat I was able to make my own drinks), I couldn’t reach the food cupboards or microwave/oven. I can’t lift pans etc. anyway without injuring myself, but biscuits being deliciously out of reach is a bit mean.

The bedrooms were perfectly split into a double & twin with connecting bathroom with a bath, shower, & Turkish bath, a double with a bathroom & shower + sauna, and a twin with bathroom & shower. The connected twin & double were the designated accessible rooms with handrail for the loo, shower seat, extra room in the twin, & just enough room for my wheelchair in the double once Mr Geek had shoved the bed over a bit. He would definitely prefer to share a bed than have extra wheel room & I wasn’t going to.deny him that. The beds themselves were far from the camping cots of memory. Our double had a fully sprung mattress with an extra 2″ foam topper & two pillows each! (Which were added to the collection of pillows & wedges). This was certainly more hotel than holiday park.

As we were all exhausted on the 1st day, we opted to eat in one of the on-line restaurants. Again, TripAdvisor was filled with stories of unclean surfaces, unpleasant staff, and terrible food. Having rocked up at 9.30, we were seated, our order taken in my addled version of French (ha! Brainfog means I can barely speak English, and here I was attempting to get by in a place where mainly French & German is spoken). The staff were brilliant, the food was fresh (as in proper fresh pasta) and they were more than happy for Beanpole to.order an adult dish whilst I had the kid’s menu. The main AquaMundo, which is the main dome housing restaurants, shops, & pool was also entirely accessible through level access. There were a few cambers to contend with & a mahoosive speed bump outside (that was actually understandably protecting cables), but I could propel or be pushed with very few jolts. Their efforts were appreciated.

The 1st night, we cracked open the mosquito traps as again TripAdvisor had warned is of plagues of mosquitos of biblical proportions. With all of us sensitive to chemicals in the air, we’d bought UV + flypaper style plug in traps and duly plugged them in. Whilst I shall sing their praises separately (the light really does attract the insects which promptly get stuck to the paper behind the grill – no nasty sizzling, just change the sticky cartridge), actually there was only need to catch a minimal number of mosquitoes. We did have plenty of other wildlife hanging about the chalet though – baby frogs in the grass (and decking), and a friendly cat who quickly learnt that the suckers in 709 would exchange paté & salmon for allowing a quick rub behind the ear.
Further surprise accessibility wins were found on day 2 when we ventured into.the AquaMundo swimming complex. At this point there were calls for “I do hope you’re going to blog this…”. Well, yes. Well equipped disabled changing rooms are supplied and kept available by exchanging your chalet key for a special access key allowing you to unlock the changing room doors. Inside the roomy area is a bench, changing bed, shower & stool (no hoist). Already impressed, we asked one of the lifeguards how I could get into the pool expecting to be pointed towards the usual ducking stool. Instead, I was lent the use of a pool chair- leaving my own chair by the side, the pool wheelchair is like an oversized 3 wheel pushchair which can be wheeled directly into the sloped pool until I’m deep enough to float out (I wear a floatation belt), then returned to the side until I need it. AMAZING.  It was dubbed the mermaid chair & was surprisingly comfortable.

As I sat in said mermaid chair with Squooze (SIL) waiting whilst Mr Geek & small people threw themselves down slides, I asked her how the place was in terms of sensory aspects. Of course, I would be looking at it from a mobility aspect but from  neurotypical perspective. She seemed very much at ease which was ever so nice, but looks can be deceiving so I asked the question: “it’s quite echoey, but it’s big enough to turn the voices into a background hum. The only thing that’s breaking though is the occasional shriek – cue child screaming down slide- and people shouting very close. I don’t like people swimming too close to me either.” It was noted that it was surprisingly uncrowded for late July / August and we were all feeling very chilled. It was nice spending time as a group & it gave Mr Geek & Squooze some time to properly spend time together as sibling grownups. He still feels very protective of her despite being the younger sibling & she still remembers the irritating little knobhead who drove her nuts (yeah, he’s still.in there).

We were all exhausted after swimming and they all caught the land bus back to the chalet to conserve a bit of energy- I say they because I’d attached Leonardo to use as a type of mobility scooter, so rode him all the way back, plus a bit further to check out the nearly park. With the smooth tarmac pathways built for the hundreds of electric golf buggies, Leonardo can pull some serious speed. I’m happier at speeds under 10mph, especially when there are pedestrians around, but there was a sneaky moment of wind in my hair “bicycle Bicycle BICYCLE!!”. 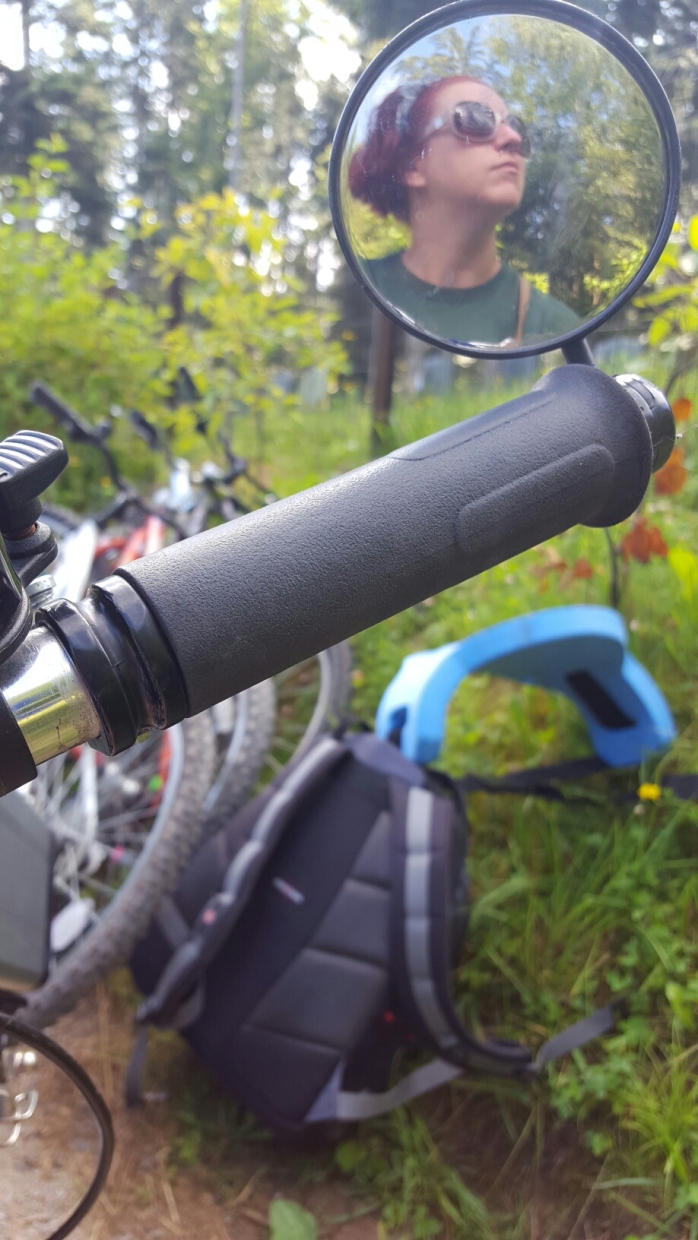 Our 1st proper evening was very reminiscent of the countless other evenings that we’ve spent holidaying with Mr Geek’s parents. Although I wasn’t partaking of the “happy water” (apple schnapps), it was flowing and we laughed away the evening with card games including the staple Uno and theist competitive game of Pass the Pigs imaginable. I may have been a little number in the head after a round of (much needed) painkillers, but the human interaction from evening silly games is like chicken soup for my soul. It creates connections. And although they are my family by marriage rather than birth, I’ve spent 1/3 of my life with them and don’t feel like that outsider looking in.

This is in stark contrast to how I see (saw) my parents with their respective inlaws. Being here, it occurred to me that all of my memories of visiting my maternal grandparents for a ‘holiday’ included me sharing a room with my mum & her making the standard excuse of “he’s really busy at work”. Even now, excuses are made not to go & support mum when she makes the journey to care for her mum. I can’t imagine not rocking up & helping if Pen & Mr Geek Snr. were declining in health, or at least just supporting mentally.
This doesn’t just apply to my dad. His parents visited once every 2 years from Canada & stayed with various relatives. In total, I met them 8 times in my lifetime. Nevertheless, they were my grandparents and I created a whole rose-tinted idea of them. As I got older, more details were mentioned about the relationship my dad had with his parents growing up & I resolved to have children who genuinely had the kind of grandparents I’d made up in my head. Consequently, my girls have the kind of relationship with their grandparents the Mr Geek had. And just look at how he turned out. My babies have been raised by a village. They’re incredibly lucky.

Note: the insomnia is clearly still.here, hence blogging until 2.30am!!

This is a personal take on our first few days at Centreparcs- for my official review, please visit my Les Trois Forêts Review Post.

5 thoughts on “Poulet Soup for the Soul”