That sounds so much ruder than it ought to! That’s at least 3 spoons right there….

A friend of mine was mercilessly mocked at the weekend for being a vegetarian who doesn’t eat a great deal of recognisable vegetables  (as in, eats pasta & cheese – sounds familiar 😉 ). That got me thinking that I ought to try out the spiralizer that I bought to make some veggie noodles.

So here is our first attempt at pad Thai! 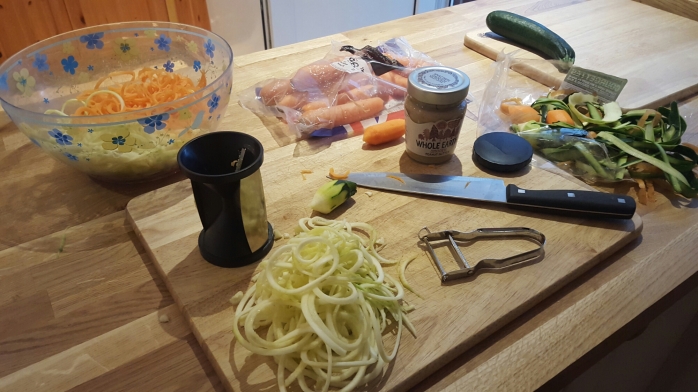 The noodles are remarkably easy as is a bit like a pencil sharpener for a courgette (That’s zucchini for my over the pond people) and because they’re softish, it’s 5 minutes to make a big bowl.

Basically, the appeal of this is making something quick that has veg in it and is vaguely healthy without me needing to stand for too long. And tastes good.

Essentially I bastardised this recipe from Inspiralized and had a take out menu on standby. I’m not usually one for weird fads, but the veggie noodles promised me more veg, fewer calories & the satisfaction of getting Mr Geek to eat courgettes.

Cooking took a full 3 minutes (prep about 5). I approve of this.

I prodded my food.

It smells like Pad Thai. It even looks like Pad Thai…. and fuck me, it actually tastes like it too! The only hint that these noodles were importers were that they were slightly more fibrous and I couldn’t do my usual cut between top teeth & bottom lip. (Stupid jaw – I have a massive, but hidden over bite with my bottom teeth a full cm further back than my top teeth and a narrower jaw.)

So I now have another veg packed go to meal for feeling like crap days and it’s yum!

This will of course be fully remedied by eating a vat of chocolate this evening whilst we continue to binge watch Community. But this isn’t a diet. It was dinner.