Nothing beats the look a teenager gives you when she encounters her mum’s friend sitting in the park in full view of actual people with her crochet out. This is worsened when said friend (me), acknowledges her existence and creates a universal link between the teenager and the act of crocheting. Nothing says middle aged and middle class like a bit of crochet in the park.

But crochet I did, because blanket project #2 is underway and it’s a colourful one too. This is a pram blanket and as such is using all the bright colours needed for the baby to gaze at in their newborn fuzzy eyed way. 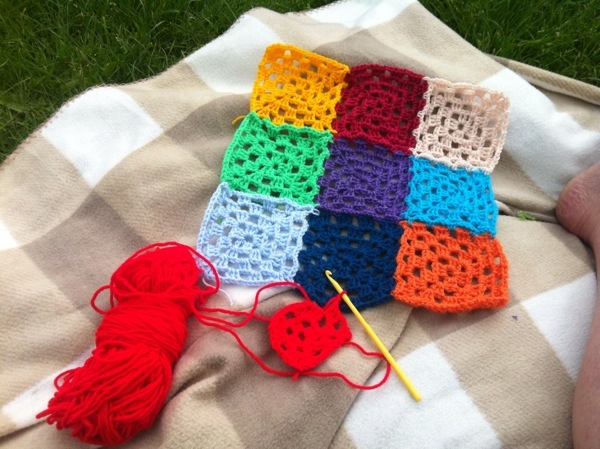 Interestingly, the blocks of colour aren’t as fiddly as the thisisnevergonnaend blanket with its change of colour for every round and I’m planning on a 6×7 block with edging so it’s not as big either. I have decided though that I need to do something other than granny squares for the next project as I’m becoming slightly unhinged when two similar colours are joined too closely….

What said teenager probably doesn’t know yet is that eventually, when she becomes old and decrepit and nearly dead like us ancient people in their 30s, she’s going to need an outlet for her stress. Something monotonous but creative which makes everything else go away for a few hours. I knit or crochet, her mum runs, LSH rides his bike over muddy hills. It’s what stops us from listing you kids on eBay, or crying in public places, or allowing the inner monologues to become very offensive outer monologues. It’s our ‘thing’. And I’m not ashamed to get it out in public.

6 thoughts on “Getting it out in public”